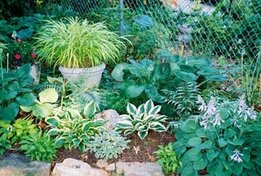 ​Hostas should be planted in shade, but they prefer light or partial shade to being planted in heavy shade. They like soil that is enriched, moist but well drained and slightly lower than neutral pH. They benefit from large additions of organic matter, such as garden compost, leaf mold, well-rotted manure, composted pine bark and peat moss to the soil in the hole, especially if the soil is heavy clay or is very light and sandy. In poor soils and those heavily infested with greedy tree roots, in particular those of large maples, consider planting hostas in raised beds.
Container-grown hostas can be planted just about any time, but should be kept moist after planting. Dig a hole about a foot deep. The width depends on the size of the Hosta being planted. In general, Hosta roots spread out horizontally, so be generous with the width of the hole you dig. If the Hosta you have bought is a large variety, prepare a wide hole because its roots will quickly expand. Remove the Hosta from its pot carefully, holding the top of the soil with your hand and turning the pot upside down. Gently ease out the root ball with the soil. Loosen the outer roots if they are curling around the outside perimeter of the root ball. If they are tightly coiled and don't come apart easily, make a few vertical cuts with a sharp knife to encourage new roots to grow toward the side.

Add up to 50% organic matter (peat moss, leaf mold, composted bark, soilless potting mix, etc.) to the soil removed from the hole, mix, and fill around your new Hosta, tamping it firmly to prevent air pockets. Many growers also add a handful of a balanced fertilizer (10-10-10 or similar ratio) to the mix. Some use slow release fertilizer pellets according to the directions on the box. The crown of the Hosta should be placed level with the adjoining soil. Water well.

​​If you are planting a Hosta that has been shipped to you bare root from a mail order nursery, soak the roots in a bucket of tepid water for a few hours (no longer than overnight). Form a soil cone at the base of the hole and spread the roots over and around it. Make sure the crown is level with the adjoining ground.

Hostas are heavy feeders. Some Hosta growers add a granular fertilizer around established plants in spring, usually a 10-10-10 ratio. The addition of small amounts of chelated iron, magnesium (from a sprinkle of Epsom Salts), or calcium may also be beneficial. Do not fertilize after August because this will cause growth of soft foliage that would be damaged by early frosts.

Mulches reduce evaporative water loss, assist in weed control, and just make your garden look better. However, slugs really like to hide in mulch and it may be necessary to try some of the new iron phosphate slug baits like Slug-go or Escar-Go! These products are not poisonous to birds or pets like ordinary slug baits. Do not pile mulch on top of the crown of a Hosta—hold it away from the petioles to prevent fungus.

Hostas are tough plants and will withstand some drought. However, they much prefer an abundant amount of water throughout the growing season—about one inch of water a week. Hostas that are given a generous amount of water will reward you with more beautiful foliage. If a drought condition is prolonged in late summer, some hostas may go "drought dormant" and stop growing. Make sure they are well watered then.

Unless they are interested in propagating hostas from seeds, most growers remove the flower stalks after blooming because they believe the plant is better off not expending a lot of energy in seed production. Hostas that bloom early in the year are not fragrant, but a lot of the late summer blooming hostas are descended from Hosta plantaginea and have very fragrant blossoms. These late blooming hostas generally tend to be good selections for the South because they originated in southern China and withstand our long, hot summers well. However, most hostas will do well if they are given good care. If you have questions about named varieties, consult a neighboring gardener who successfully grows hostas or a reputable Hosta supplier.
​
Images on this website are copyright protected. They are not in the public domain! Contact us before attempting to reuse.
​Copyright ©2023 East Tennessee Hosta Society.