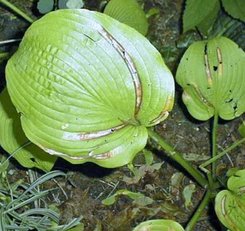 On Sunday, November 9 2014, the East Tennessee Hosta Society members were fortunate to welcome Dr. Parwinder S. Grewal to our annual meeting. He was accompanied by his assistant, Dr. Ruisheng An. Dr. Grewal has recently come to UT Knoxville as Professor and Department Head of the Department of Entomology and Plant Pathology.

Dr. Grewal came to UT from the Ohio State University where he carried out research from 1999 to 2004 on foliar nematodes at the request of the American Hosta Society, and he kindly agreed to bring us up to date on his findings.

Nematodes are tiny worms. Dr. Grewal stressed that numerous nematodes are found naturally in the ground, both harmful and beneficial. Foliar nematodes damage hostas and more than 100 other species of plants. A few I noticed on the list he presented (because I grow them) were ferns, phlox, lilies, and begonias. They also affect fungi, and the nematodes used for his research were cultured on fungi and transferred to the hostas. Foliar nematodes rarely kill plants, but they greatly affect their appearance and vigor.

If infected dry leaves are left on the ground, foliar nematodes can be spread by the wind blowing them from garden to garden. They survive desiccation and freezing. They are spread via soil, water and through infested plants themselves. They over-winter in soil, debris, and the crowns of the Hosta plants. They are everywhere, and completely removing nematodes from our gardens is not going to happen.

In spring the foliar nematodes move from the crown of the Hosta plant into the soil and lay eggs. Dr. Grewal determined that in the summer the offspring travel outside the plant up the petioles to the leaves and enter through breathing openings at the underside of the leaves. They are also known as "migratory endoparasites". When they enter the leaf they travel in between the veins feeding on the plant's cells. They puncture a cell and suck out the juices, killing the cell. This is what causes the familiar yellow to brown, dying strips of cells between the veins of Hosta leaves.

These nematodes over-winter in the crown and buds of the Hosta. Dr. Grewal's research studied their location in the various layers of the Hosta bud, and it was determined that they are found mostly under the first layer.

It was also determined that they do not over-winter as eggs. Some juveniles were found and there were more adult females and fewer males. Eggs do not survive the winter, but the adults survive in the crown and buds and in the soil around the plant. 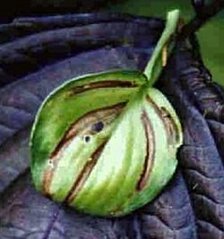 Some tips Dr. Grewal mentioned to cut down on their numbers:
Dr. Grewal tested if the nematodes isolated from infected hostas will cause disease on new Hosta plants. He inoculated potted hostas from 20 different cultivars. Of these, 19 developed nematode infections. Hosta plantaginea did not show nematode disease symptoms. I asked him if there were other resistant species, and he said there may be, but his research was not a study of the different types of Hosta.

Hot Water, the method was mainly for use by nurseries.
​
Boiling water was studied as a method to control nematodes. Dr. Grewal said they heated the water until it started to boil. The plants were dipped briefly into the hot water and this killed the nematodes. Water of the same temperature was also tested to drench the soil in the pots. This killed many nematodes, but after 150 days the surviving nematodes started to multiply.

Chemical controls were also studied, and in lab tests Diazinon and Trichlorfon were found effective in controlling the nematodes. Also effective was ZeroTol, the only one available over the counter. If one were to use these chemicals, they should be applied in June, or before the nematodes establish in the leaves.

Dr. Grewal has written several papers on the results of this study, and one was printed in the Hosta Journal, No. 32, pages 64-67, (2001). Further studies were made in 2013 and a new evaluation was made of various chemicals:

In Liquid: Some of those found to be effective (100% kill in petri dish): In Soil Drench Tests: Soil drench tests were made on hostas in nursery pots. The nematodes were found to have zero survival up to 42 days when the following were used:
In Leaf Disc Tests where he sprayed infected leaves. Most effective were Nemakill and Pylon. He said Pylon is available, made by Bayer.

11/15/2014, Notes by Elin Johnson, reviewed and edited by Dr. Grewal
Images on this website are copyright protected. They are not in the public domain! Contact us before attempting to reuse.
​Copyright ©2021 East Tennessee Hosta Society.